I’ve been thinking about something specific for the past month or so.

The topic is hard for me to put into words but, fundamentally lies at the intersection of (Life,Liberty and,Risk). Hence the title.

While I’ve done my best to keep the language simple, there are some technicalities and some assumptions made to arrive at the conclusions that I think make the most sense.

I would genuinely love any feedback, corrections, mistakes, refinements, critiques of any form you could provide.

I’ve done some reading in an attempt to understand and shape my world view better. The end result of this is best summarised in the following points.

Now to make the first jump based on these points, let us say that these are the rules of the ‘Game’ of life.

But, based on the 5 earlier points, all gains are wiped at the end no matter who we are, so, can there really be a way to be the ‘best’ anything? Does the word ‘best’ still have meaning in a world where an individual cannot persist?

Lets say since all gains are wiped out, there is no end value to ‘winning’.
As a result, it is worthwhile to investigate what the ways to play this game that fit into these 5 points are.

If somebody lives the ‘best’ life that they can, how long will the effects of their lived life have a meaningful impact on the rest of the world?

By effects, I am talking about things like Memories of the person, things they have created, institutions that they have supported/created, inheritance left behind, in summation, Legacy.

While legacy and effect might not ‘matter’, I am only addressing whether and how long an effect has impact post one’s exit from the world.

Meaningful impact, I choose to loosely define as anything that changes how any another person lives, their behaviours and choices they make through their life.

The question is, again,

How long will the effects of a lived life have a meaningful impact on the rest of the world?

To try to answer this, let’s make a couple of reasonable assumptions,

Another part could be, what is passed on materially to future generations.
This can be reasonably addressed using similar questions, like,

Without being very empirical with this, I’m going to try to answer the question,

How long will the effects of a lived life have a meaningful impact on the rest of the world?

Lets take the most secluded, isolated, small life, having few friends and knowing only your family, very likely your effect is going to have a meaningful impact only on the people closest to you for a few generations.

If we expand on this and live a bigger life, the effect is likely to be slightly larger for a slightly longer period of time.

I thought 4 generations was a good estimate and four generations overlap over roughly 250 years.

So, the choice really is,

I think, if you want to have long term impact, you need to be ‘playing’ right at the edge of the boundaries of the ‘game’ to try to redefine them. 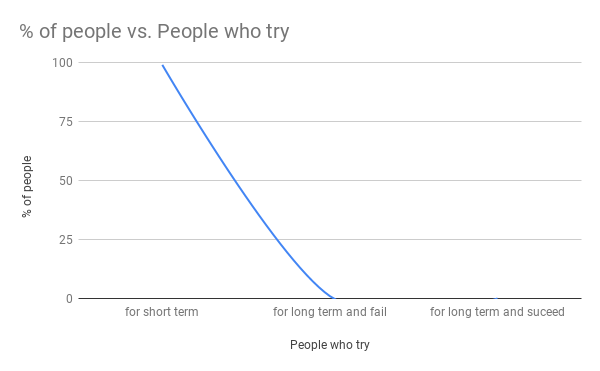 If you fail by trying, that’s fine, you would’ve failed by not trying anyway.

If you choose not to try, that’s fine too, you’re with a huge chunk of people.

The question that I’ve been struggling with, is why isn’t everyone trying?

So, where does Risk fit into all this.

The biggest risk you can really take, is in truth, not much of a risk at all, because you can now be armed with the knowledge that you are very likely in the 99%.

There ceases to be a way to say high risk or low risk because, they all fold into the category of low risk, only higher or lower risks since most risky choices are in truth scenarios where you fold into the default.

Unbounded high risks exist only in the short term, not in the long term and the effects of such risks will probably not have an impact beyond your lifetime and if they do, probably only for ~250 years.

If I die tomorrow, my life will be forgotten about by all but those closest to me in less than 100 years, the effects of my life might have a meaningful impact for maybe another 50–100 years, but, as of now, not more.

I find this thought incredibly liberating.

The deviations as a result of these impacts could be severe in the short term, but, more often than not regress to the mean.

I came to these thoughts about a month ago and have found myself in a weird sense of peace since then.

These things seem to hold true regardless of which school of thought I turn to.

Again, this isn’t a novel set of thoughts in any way, by admission, I’ve derived this from reading what has already been written.

What this has left me is a whole bunch of questions to think about and a bundle of optimism that is looking forward to the rest of this.

The conclusion that I have arrived at is that life simply is, there is no good life, there is no bad life, most lives matter only to us and those closest to us and, will have minimal or no long term impact.

I can be safe in the knowledge that I cannot do too much or any damage to this world in the long term and also that I very likely will not do too much good either.

As an extension of this, for me personally, I want to do my best to live a risky life that tries to push the boundaries of this game. There no winning, losing, success or failure in this game. The objective is to just play on some level.

Maybe that’s the point of this, just to play.
What’s the worst that’s going to happen? Its very likely the same as the best thing that could happen, nothing in the long term.

The worst thing that could happen has already happened, we’re already alive and, suffering.

This is where I am right now, I will write more if I or anybody else finds faults with what I’ve stated above or if I find something that makes more sense.

If you stuck with me till the end, first of all, kudos to you and thank you.

Many thanks to Raghav, Vignesh and, Vishak, who helped me think this through and helped me write this out.

I would love to hear your thoughts on this.