This is a prelude to a youtube video i’m making.

[Update : The video can be found here ]

I’ve been asked to write/explain this by several people close to me.

I think for most people, we hear the terms in the media/conversations and we just never ask the question. As a result, we have a whole bunch of people who don’t really know what these terms are.

The terms Right Wing and Left Wing from a political perspective originated during the French Revolution.

Maybe that’s telling of the nature of Right and Left as it exists today, the Left often talks of a revolution to reset the socio-political order, while the Right often talks about not fixing things that aren’t broken.

So, with that context, let’s try to visualise this a little.

This is how I see it. 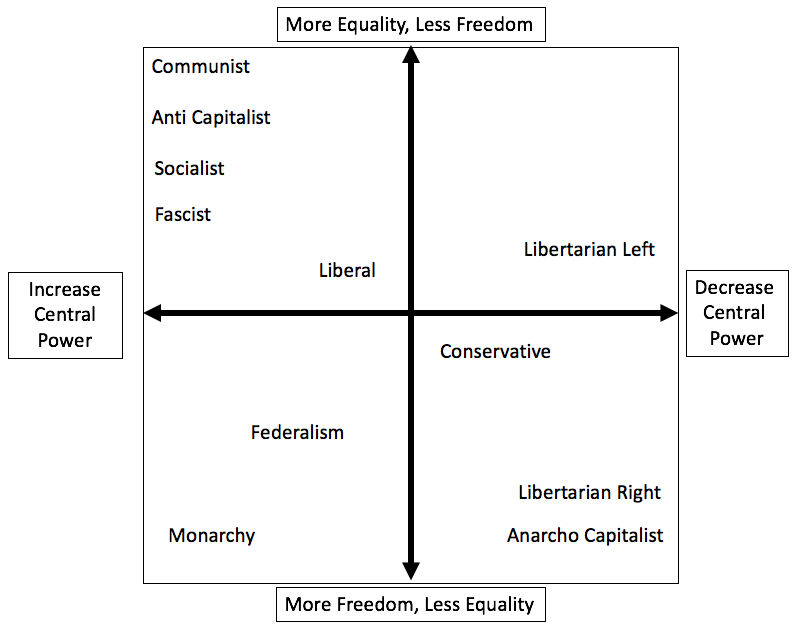 Granted, this is by no means complete, but, it’s one way to think about it, it’s my way of thinking about it as well.

This is a sort of starting point to help demystify this nonsense.

So, the 3 simple questions you have to ask yourself are these:

The idea here is to show that there are several places you can be on this graph and be termed RW or LW.

But, those words have no meaning because I could be either for equality or for freedom on the Right side and the same on the Left side.

The truth is you can find things to agree on with pretty much everyone you disagree with.

Where do I stand?

I got asked this enough times when I tried explaining this to people.

I’m very much Libertarian Right. I prefer central government powers to be curbed as much as possible in order to allow it to enforce law but, not much more. I would like to see more freedom in markets and society, with Personal Freedom coming before all else.

You’ll find that there are things to agree and disagree with, with me, and that’s fine.

I hope this was of some help to somebody.

I would love any feedback that you have.