A good friend of mine sent it to me when I was in college.

Back then, even with the ending of the video, the importance of the message didn’t really register in me.

At the start of 2018, I framed my goals for the year and have been going about achieving them to the best of my abilities.

Just last week, I had dinner with a couple of old friends of mine and the topic came around to people we’ve been in touch with. Turned out, because I’ve framed a goal for myself around getting back in touch with a significant number of people from my past, I was the one who was in touch with the most people.

During my no smartphone experiment, I realised something.

Rather, I experienced something. Something I’d read about in a book called ‘7 habits of highly effective people’ By Stephen. R. Covey (which I highly recommend)

One of the concepts in the book is the Time management matrix. 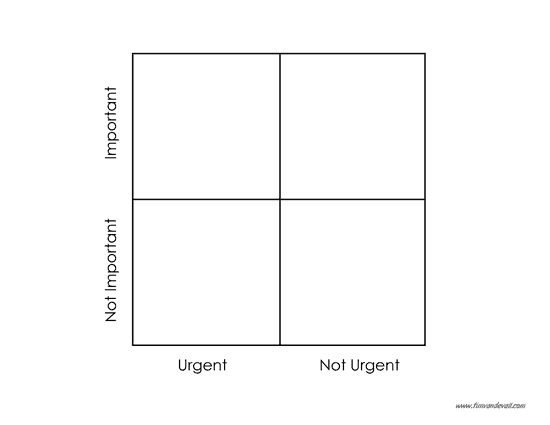 The matrix itself is quite simple to understand.

In life, we fundamentally have 4 types of tasks that fall into each individual quadrant.

This is followed by, Not Urgent, not Important tasks, because they’re often the easiest to do.

We all have only 24hrs in a day, which means we’re stuck with no time left for the Important, but not Urgent tasks.

The things is, often, this last type of activity is the one that leads to the highest long term value creation, but, we usually can’t find time for them.

Unless you’re in show business, you don’t NEED to spend those 5 hours watching the next most viral TV Show.

But, that’s what most of us do.

When I went without the smartphone, I lost all possible hope of distractions.

No instant messaging meant much less wasted time on pointless conversations. I actually ended up getting in touch with a lot more people without the phone than with, because I had the time, which is contrary to what I expected.

We don’t consider a lot of the following as things we procrastinate on:

Truth is the deadline is death, yours or somebody elses.

Apologies for getting morbid here, but, that’s the truth.

I lost a close childhood friend a couple of years ago who I hadn’t talked to for 4 months prior to his death.

I’ll never get to talk to him again and that will remain with me forever.

It’s not like I didn’t have the time, I just allocated it for everything else.

Going back to the TED talk by Tim Urban, at the close of the video, he says thats what people regret the most.

Do the things that are Important but, not Urgent.

More power to you.