This series of posts is primarily about the Kautilya King.

As I mentioned in the previous post, there are 7 aspects to the Kautilyan King.

This part will cover only Duties of a King which in my view is where a lot of advice/strategy for the modern leader comes out.

What I’d like to start with, much like the chapter in the book itself, is the daily schedule of the king ( see below )

I’ve taken some liberty to apply my own categories on the different activities of the king through the day. Most of this post is just my interpretation of what the text says. 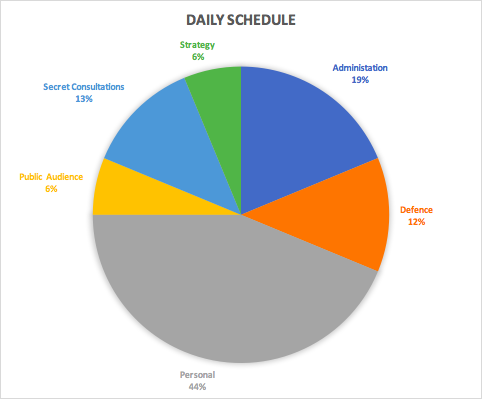 The King spends roughly 44% of their time on Personal tasks through the day, which amount to 10.5 Hours.

Which also means that the King had a 13.5 hour work day, implying an almost 100 hour work week, while working 7 days a week.

Of course, this schedule is a suggestion, but, it’s interesting to observe how hard royalty, the Rajarishi, was supposed to work.

I was working on another parallel table that would showcase how the modern leader could learn from this schedule and apply it in their lives, but, I was struggling to come up with a proper schedule that I could put out there and say was infallible.

So, instead, I’ll list some of my observations about this schedule, which speaks to a lot of the advice given to modern day leaders, especially in the age of the Internet, world wide web and, mobiles.

The first thing the King is scheduled to do after sunrise is to assess the affairs of the state, listen to the people of the state. It is possible to draw an analogy from citizens to one of customers/employees depending on context.

Kautilya makes a case for why the King must be accessible to all.

A King who is inaccessible to the general public will only hear the opinions of the few that the king is surrounded by, this can result in two bad outcomes, either the people will become frustrated due to the king not being accessible or wrong decisions due to lack of access to peoples opinions.

All aspects of this are strategic in nature, not just for optics and that’s one of the things I like about this book.

It pulls no punches, it is very clear that the objective of a King shall be in managing the economy. The fundamental way to generate wealth is to promote economic activity, and a lack of economic activity leads to a frustrated populace which leads to a loss in wealth.

The second thing I found interesting was that the king has 10.5 hours for personal activity including 4.5 hours of sleep.

Todays advice for people is to get atleast 7-8 hours of sleep everyday. Which is completely incongruent to what Kautilya suggests.

The remaining 6 hours are spread between time for eating, recreation and religion. Obviously, this does not account for commute and things like that which the modern leader has to deal with.

The third interesting thing is that, right after waking up, the king spends time on strategy and gathering data, only after that does the administrative work begin. This is a bit like going into a meeting prepared with what outcome you are solving for.

I know a lot of this post has been long form and non bullet pointy.

I’ll be using the next post in this series to cover security, revolts, and succession.

I hope this was useful in some way. Do respond with anything else that you think I should’ve covered in this post, happy to add more to this.